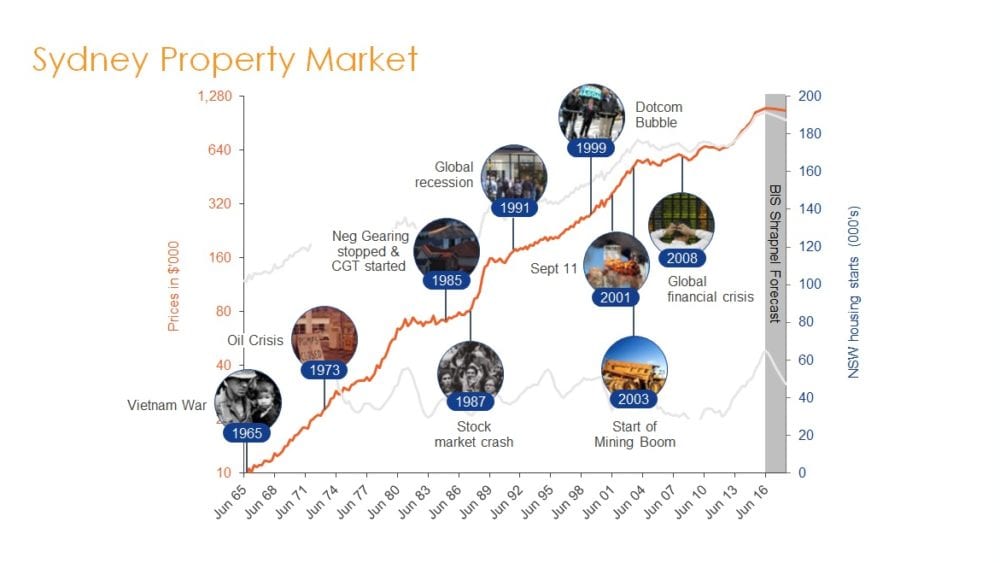 What happens to property prices in an economic downturn?

If you’re feeling uncertain about the state of the Australian economy of late, you’re not alone. Most people are looking out at the current landscape with a sense of nervousness.

Add to that the uneasy global outlook and it’s no wonder the Reserve Bank is practically begging Canberra to do something.

So it’s no surprise that a topic that comes up regularly in times like these is what happens to property markets in the event of an economic downturn?

In the lead-up to the Global Financial Crisis, the OECD estimated that property here was overvalued by more than 50 per cent.

Global banks issued red-alert warnings and one prominent commentator predicted prices would collapse by 40 per cent – so certain was he of the forecast that he pledged to walk up Mount Kosciuszko if he was proven wrong.

In early 2018, as some markets began to soften after an extended boom, experts again predicted the worst. The great Aussie bubble was finally about to burst, they yelled.

However, a plethora of markets around the country were already doing quite nicely, courtesy of a number of solid economic fundamentals.

That hasn’t stopped predictions again being made about what’s likely to happen if the economy remains flat. As you might expect, they’re all pretty gloomy, however, when it comes to property prices there is little cause for worry.

The RBA has slashed interest rates in a bid to kick the economy back into gear. This means that the cost of borrowing is lower than it’s ever been, giving households financial breathing room and the ability to pay off their loans sooner.

Affordability has improved, helped along also by the lower median house prices in most capital cities since late 2017.

Low rates are only part of efforts to kickstart the economy. Scott Morrison just announced billions of dollars in fast-tracked infrastructure spending, which will support several vital sectors and bring projects to communities sooner.

Plus, it’s likely just the start of government stimulus, which will support growth, as well as underpin confidence and employment.

There are other factors to consider. Population growth remains high. There’s a shortage of housing right now that’s not close to being met. Demand far outstrips supply. Construction activity has been low for more than 12 months and is yet to roar back to life.

In short, the classic supply and demand equation that drives price growth indicates growth, not contraction – economic uncertainty aside.

And finally, history dictates that economic turmoil doesn’t cause housing market collapses. If you plot out annual price movements in major markets like Sydney and Melbourne over past few decades, you will see the odd blip here and there, but an otherwise upward trajectory through the stormy periods.

While history doesn’t necessarily repeat, it’s a better indicator of what’s likely to happen than market naysayers just looking for a headline.