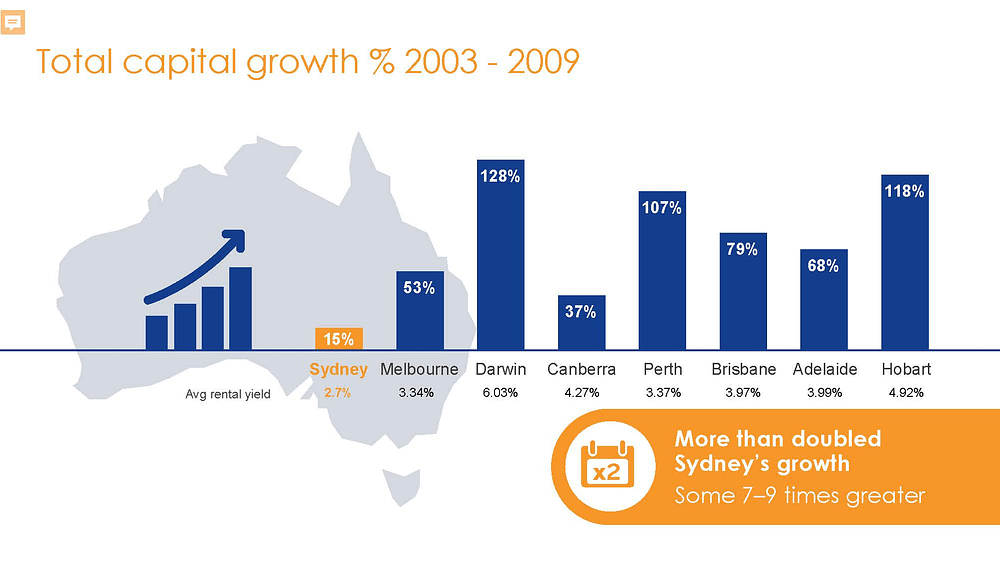 Worried about interest rate hikes? Here’s what happened last time they rose by a similar amount If you’re feeling uncertain about the state of the Australian economy of late, you’re not alone. The media speculating about property prices falling off a cliff, fixed interest rate home-loan terms ending and increased cost of living expenses, has most people looking at the current landscape with a sense of nervousness.

It’s no surprise then that the question of ‘what happens to property markets when interest rates increase’ comes up regularly in times like these.
Between May – December 2022 the RBA increased the cash rate and in turn interest rates have risen eight times by a total of 300 basis points. The last time interest rates grew by a similar amount was between 2003 – 2009, when properties in three markets grew by more than 100 per cent (with nowhere near the strong underlying economic fundamentals we’re seeing in some property markets).

In early 2018, as some markets began to soften after an extended boom, experts again predicted the worst. The great Aussie bubble was finally about to burst, they speculated. However, in a similar way to now, a plethora of markets around the country were already doing quite nicely, courtesy of several solid economic fundamentals.

That hasn’t stopped predictions again being made about what’s likely to happen. As you might expect, they’re all pretty gloomy, however, when it comes to property prices there is little cause for concern in the three markets with the strongest fundamentals. The Australian economy remains strong, with the RBA increasing interest rates to stabilise inflation, which at 7.3 per cent over the year to September, is currently the highest it has been in more than three decades, and unemployment is historically low at 3.4 per cent.

What does this mean for you?

While Sydney and Melbourne both present limited growth opportunities over the short to medium term and are highly negatively geared, there are plenty of markets across the country that are poised for significant growth with high yields and are amazing investment opportunities.

Property in places like Adelaide, Perth and Brisbane with median house prices of $718,000, $665,000 and $864,000 respectively, are still relatively affordable, especially compared to Sydney with a median property price of $1,531,000. The median weekly incomes in NSW and WA are comparable at $1,249 and $1,250 respectively while the median incomes in SA ($1,100) and QLD ($1,130) are lower, the percentage of median income to median house price is higher than Sydney, making property in these areas significantly more affordable.

There are other factors to consider. The opening of Australia’s borders in early 2022 has led to increased overseas migration. Rental property demand has increased with total dwelling rents growing by 12 per cent during FY2022 and these are expected to continue to increase during FY2023.

There’s a shortage of housing stock that is magnified by construction constraints including poor weather conditions, shortage of building supplies and qualified trades people. This, paired with dwelling commencements and completions well below their 5-year averages means demand far outstrips supply.

It is predicted there will be a shortage of around 1.2 million workers in Australia within 4 years, a substantial amount of these workers will come through net overseas migration. Housing supply is already constrained, with the national rental vacancy rate around 1 per cent. A healthy rental market has a vacancy rate around 3 per cent. While construction activity is increasing, it will be some time before supply is able to meet demand.

In short, the classic supply and demand equation that drives price rises indicates growth, not contraction – rising interest rates and inflation aside.

And finally, history dictates that economic turmoil doesn’t cause housing market collapses. If you plot out annual price movements in major markets like Sydney and Melbourne over the past few decades, you will see the odd blip here and there, but an otherwise upward trajectory through the stormy periods.

Especially for very high yielding property of 7 – 9 per cent yields.

It’s highly likely that property prices in these few markets will continue to grow in the next 10 plus years, so it’s better to buy in the next 3- 6 months, than wait a year or two.

Of course, whilst higher interest rates are currently slowing most property markets, growth is slowing from 20%+ growth to 10%+, these markets are still experiencing growth just not the crazy growth seen in the last year or two, until interest rates start to come down again. This does not mean growth will stop in the few markets with the best fundamentals, like Adelaide, Brisbane, and Perth. These markets generally have better fundamentals now than when they did between 2003 to 2009, when they experienced an exceptional period of growth.